What is inside a Bon Stupa? Lama Sangye Monlam explains 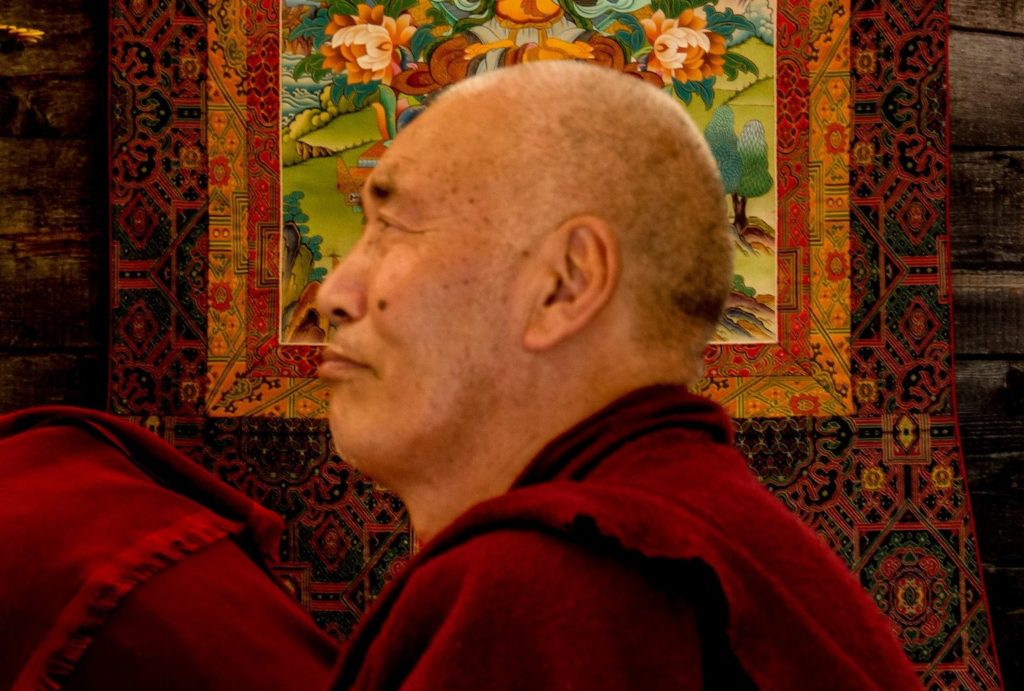 Lama Sangye Monlam, former resident Lama of Shenten Dargye Ling, and his student Sophie Frisch built a Stupa in Yeshe Sal Ling, Lama Sangye’s center in Austria, honoring a wish of Yongdzin Rinpoche. In the summer of 2022, Khenchen Tenpa Yungdrung Rinpoche and other lamas came for the consecration ceremony which was originally planned for May 2020 but had to be postponed because of the Covid-19 pandemic.

When and why did you start planning to build a Stupa at Yeshe Sal Ling?

LS: Originally, we wanted to build just a sang-khang (a hearth for the sang ritual) in the form of a Stupa, and we ordered a finial for it from Nepal with the “horns of the bird” as is used for Stupas. Yongdzin Rinpoche saw this ornament and said that we should build a Stupa, and we followed his suggestion. The inauguration of Yeshe Sal Ling by Yongdzin Rinpoche was in 2015 and this was some time after, so the decision to build a Stupa must have been made in 2016.

You have a Stupa now, but no sang-khang?

LS: That´s true, but we are starting to build one now.

Comparing the Stupa at Yeshe Sal Ling with the two Stupas of Shenten – what is the size?

LS: It is somewhere in between the sizes of Shenten´s Stupas. It is a bit smaller than the higher one and a bit higher than the smaller one. (Note: there is one meter difference between the Stupas in Shenten.)

How did you proceed from idea to realization? Did you follow a drawing of a model Stupa?

LS: There is a description of a Yungdrung Koeleg Stupa in the texts, and a drawing by Yongdzin Rinpoche based on the description. The main principle is that the size of each part of the  Stupa is expressed as a multiple of a unit. The unit varies. For practical purposes, it is usually chosen to be a multiple of the height of a layer of bricks.

SF: Our unit was around twenty centimeters, corresponding to one layer of bricks lying flat (6.5cm) plus another layer of bricks standing on edge (12cm) plus two layers of cement.

You called Dorje, a French practitioner who led the building of the second Stupa at Shenten, to organize and supervise the construction in Yeshe Sal Ling, is that correct?

LS: Yes, Dorje had already assisted A’u Norbu with the construction of the first Stupa at Shenten, constructed two smaller Stupas outside Shenten independently, and then led a team of volunteers who built the second of Shenten´s Stupas. He had become a very competent Stupa builder. With his experience and the help of volunteers the construction of Yeshe Sal Ling’s Stupa went very smoothly, without any obstacles.

SF: We were very lucky with Dorje and also with the volunteers, who came from the Czech Republic, Hungary, Germany, Switzerland and the Netherlands, as well as from Austria. They were very skillful  and hard-working and built the Stupa in around three months in the spring of 2019.

Stupas are filled with consecrated and blessed ritual objects; can you give some details about what is in your Stupa?

LS: Yes, there is a large number of objects inside the Stupa on different levels. The concrete base contains a triangular hole. Into this hole the three harmful emotions are banished. Khenchen Tenpa Yungdrung Rinpoche placed there a drawing of three animals representing three mental poisons: a snake for anger, a bird for desire and a pig for stupidity.

Then, the lower part of the Stupa consists of five steps, representing the five elements. Above the steps, there is a straight part, and inside, a vase dedicated to Nampar Gyalwa (an emanation of Tonpa Shenrab), containing his mantra, grains and various medicines. The vase is surrounded by other offerings, like food, and by many boxes full of tsa-tsas (tiny Stupas molded from clay, painted with gold colour).

SF: While the treasures on this level are mostly of a worldly nature,  the higher we go, the more elevated states are represented by the content of the Stupa.

LS: Above the straight part there is a platform, and inside it are mantras and images representing the protectors of Bon, like Yeshe Walmo, Mibdue, Nypangse, Menmo, etc., and also offerings for the five senses (butter lamps, incense, water, flowers, food), and tormas.

SF: Lama Sangye himself made large tormas from clay and decorated them with flower shaped ornaments, beautiful to see (but now invisible).

LS: Above the platform there are four more steps, symbolizing the Four Immeasurables: immeasurable compassion, love, joy, and equanimity.

Inside, we placed what is perhaps the greatest treasure of the Stupa: petchas (Tibetan loose leaf books) forming a complete set of the Bon Kanjur. As we were wrapping the petchas, Ponlop Tsangpa Rinpoche was just giving teachings in Yeshe Sal Ling and he helped with the wrapping of the petchas and performed one of the consecration ceremonies that mark the completion of each layer of the Stupa.

At the center of the Stupa there is the “tree of life”, an octagonal wooden pillar. This pillar, originally almost as high as the Stupa, is cut into two parts. The short part is inserted in the lower part of the Stupa, and the long part runs from the platform up to the top of the Stupa. Each part is wrapped in many kilometers of mantras, and then in khatags of five different colors.

Then, above the four steps is the bumpa (vase) of the Stupa, there is a niche facing east with a statue of Tonpa Shenrab visible through a window. Inside the closed part of the bumpa, there are small clay reliefs of Yidams, copies of Yangtse Longchen and Zhang Zhung Nyen Gyud, and other offerings, for instance, a piece of meteorite iron given by Yongdzin Rinpoche.

How did you get materials for the Stupa?

SF: You mean the material that we just mentioned? We ordered the Kanjur from Tengchen monastery in Tibet and various medicines from Nepal. Food and other offerings could be found here.

And what about construction materials?

SF: We used the bricks and cement common in Austria. For the tree of life, we bought a tree for two hundred Euro, and a carpenter who is a Buddhist cut it into shape for free. That was kind of him. The price quoted by a professional carpenter was around a thousand Euro: unaffordable.

Do you know the total cost of the Stupa, and can you share it?

SF: I lost track of the cost completely, but it was a large amount of money. Fortunately, the expenses could be spread out over a longer period of time. Everything that went inside was ordered and paid for in the course of several years before the start of the construction.

When was the Stupa finished, in all its parts?

LS: In the summer of 2019. We wanted to have the consecration soon after and planned it for the spring of 2020 but then the first wave of covid prevented it. In 2021, we had to postpone the consecration again, for the same reason.

SF: Lama Sangye performed a small consecration ceremony shortly after completion. The Stupa was properly consecrated, but there was no celebration with many Lamas and guests until 2022. In 2022, Khenpo Tenpa Yungdrung Rinpoche had time to come to Yeshe Sal Ling and the covid situation was not so bad in the summer, so we decided to have the big consecration ceremony in July 2022. On the occasion, Khenchen Rinpoche gave a Namdak initiation. He was assisted by Geshe Samten Tsukphu and  Geshe Lungrig (whom you know from Shenten), Geshe Sangye Yeshe and Tsultrim Tenzin, and also Khenzur Nyima Wangyal, who came from Paris together with his wife, the singer Gazom Lhamo. Geshe Sangye Yeshe and Tsultrim Tenzin came from Triten Norbutse two weeks in advance and did a lot of preparations. Geshe Sangye Yeshe acted as the Umdze (master of ceremonies who leads the recitations). Ani Tsultrim Sangmo assisted too. Of course, Lama Sangye himself also participated in all the rituals. The Lamas performed rituals in a tent in the garden for three days from morning to night, almost non-stop, culminating in the Namdak initiation on the last day.  We had good luck with the weather. Gazom Lhamo gave a recital the day before the consecration.

And how many lay practitioners came?

SF: Around twenty-five, maybe thirty people, the maximum number on the spot at any one moment was twenty, some came only for a part of the ceremony. People came from France, Poland, Hungary, Germany and from Austria. They are not visible in the pictures because it would have been complicated to ask everyone for permission to publish. Fortunately, nobody contracted Covid. We were very careful and tested people on their arrival.

Lama la, you have been living “full time” in Yeshe Sal Ling since 2017. What do you appreciate most about the place?

Yeshe Sal Ling is a very good place for meditation. There is pure air, it is located in higher altitude and there is a mountain just behind the center. All these are favorable conditions for practice. It is, however, a small center with rooms for only about 12-14 practitioners at the same time, and not comparable to Shenten, where sometimes hundreds of Bonpos congregate.